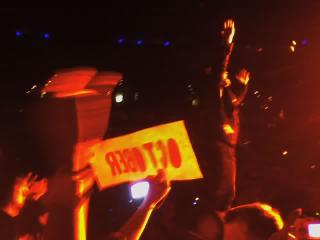 October was always my "favorite" month, Back In The Day when I believed in favorites and bests. It seemed like a nice moderate month - not too hot or cold, not too busy or boring. And, it was the month-of-choice for titles or lyrics of songs by both U2 and A-ha. Say no more.

Ah, but I will. So this past Monday night, the 3rd of October, I attended what I think was my fifth U2 concert in the month of October (following one in Dallas 92?, one in Detroit 97, and two in Providence 01). It was, of course, one of those nights after which Anne Shirley might say the rest of life is ruined, if I had time to dwell. But since I don't, I'll post a quick photo - not very good, but the only one I took on my camera phone, and good enough! - and one quick lasting highlight from the night. Maybe if I get more papers graded, I'll let myself post a few more happy memories.

Unexpected beauty:
The band played "Miss Sarajevo" - a haunting song I don't recall hearing in concert before, but one of my "favorites," and as they started into it, I shouted to my friend Karin (thrice, since she's not a professional lip-reader), "Is Pavarotti here?!" The original recording of "Miss Sarajevo" includes a powerful aria belted in Italian by Luciano Pavarotti, in the midst of Bono's raspy verses and the band's ethereal accompaniment. One of my favorite things Monday night was Bono's announcing that Pavarotti was NOT here (did he read my lips?) and then his singing the operatic melody himself. It was beautiful. And, it didn't have to be; they're the greatest rock band in the world, but Bono's stage name supposably comes from an ironic acknowledgment back in the day that he got the lead singer gig for his charisma more than for his voice. It's a sad and hopeful Ecclesiastes 3-style song - celebrating fun and life in the midst of war and hate - and the band, sans the Big Tenor, performed it gracefully.
Posted by Rini at 3:44 PM