Anyone know a good way to clean a canvas chair? I tried scrubbing it with detergent and wiping/rinsing it. I tried baking soda.

When I moved up here five years ago, my mom and I arrived at my apartment in Hamilton about two weeks before my Big Truck Full of Stuff did. To ease the pain of squatting (my mom's joints, you know; I'm fine with the floor) I bought two folding chairs. These are the two pieces of "furniture" I've had in Connecticut for this year. One is a black metal folding chair with a nice green pillow tied to the seat. It's aka Georgie's chair now. The other is my trusty purple camp rocking chair with built-in cupholders. It's also the only piece of my furniture I had with me all of last year when I lived in a furnished place while the rest of my stuff lived in storage. Buddy has made it his chair this year. 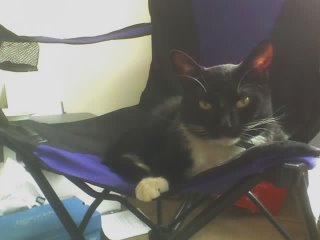 Last night (coinkidinkally the day after I'd observed that it had been over two months...) Buddy had himself a whopper of a seizure which for the first minute took place in the rocker (later he flew about six feet across the room and knocked the TV back by a couple of inches before flying back to beneath the rocker). One of many unfortunate features of Buddy's grand mal seizures is the loss of bladder control.

Should I scrap the camp chair now that I have old and new real furniture in and on its way to being moved into our new home? Or is there a way to salvage it for nostalgia's sake? I'm full on into this "get rid of everything" stage in my lifelong quest To Simplify, but the thought of setting this chair out by the dumpster gave me a pang and a pause.

let the chair go. you have a picture or two, that's enough. poor buddy. is he okay today?