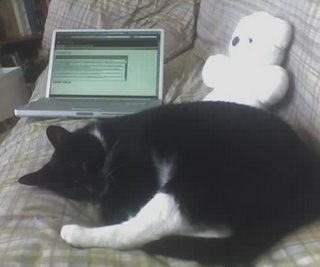 Today I joined an online support group for guardians of epileptic cats.

So far I've learned that there are other people (and cats) like me (and Buddy) out there, but haven't learned anything more practical than that.

Gave me pause to list: these are the online/email groups I've ever joined in my life (that I can remember):
1) a postmodern-Christian discussion group that I followed intently through two years of grad school in Ohio, until the group and my interest simultaneously petered out. I'm still officially a member, but hardly ever receive (and less often read) emails, and never visit the website.
2) a Rich Mullins fan/discussion/grief group that I followed intently through grad school and a couple of years after that, until the group's postings grew less frequent and compelling, and my grief and attachment to studying celebrity death/grief got buried (no pun) in busy life. Ditto above membership status.
3) various course lists for popular culture/mass comm classes I've taught. Group ends with the course's completion.
4) "Girls" - my college roommates who gather in person for a day of catching up (and spouting off) every other month, but who don't do or say much online except when we're arranging who'll bring what food.

These are groups that consist of an online site of some kind, and exchanged emails (must be a member to post/read) - so don't include the gazillion email lists I'm on the receiving (but non-posting) end of.

Wouldn't it be great if after a (brief) flurry of "sorry to hear about Buddy; have you tried a spinal tap?" emails my involvement in this group could peter out, too, because Buddy and I no longer felt a kinship with them?
Posted by Rini at 1:45 PM