Today the ol' Saturn turned 100,000 miles. What's most momentous about this event in my life, is that this is the first car I've ever had that didn't already have 100,000 miles on it when I acquired it.

Case in point: Mucous, the 1981 Honda Accord my p's bought for me when I graduated from high school at 16, 19 years ago! (It came with a grinning red-headed junior high boy's head growing out the top, of course.) 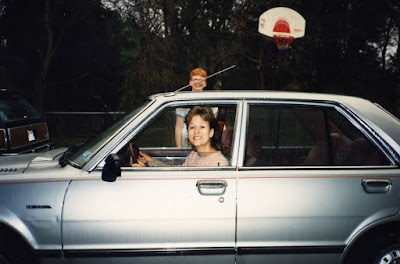 Followed by the rusty red Cavalier and the aging maroon Camry that drove to the D'ville Saturn dealership to breathe its last at over 250,000 miles.

It's fun/ny thinking about a poor, young college kid or recent high school grad being grateful to receive my Saturn now that it's old-and-busted enough to have been received by me. But I ain't giving it up. Check back in with us in another eight or ten years for the 200k roll.

I bought my car new in the summer of 2001 two months before moving from the big TX to the crazy MA. Within a month I drove 'er down to Galveston for vacation, and then in another month, three days' drive up to New England for non-vacation (aka Work). We've driven to five U2 shows in Boston, Providence, Hartford, and Philly; to New Haven a bunch and NYC a time or two; to Montreal; and back and forth to Storrs, CT, more times than you could shake a stick at. Really. Your arm would get tired. Even a two-armed shake. Even with people standing beside you helping you shake the stick, like Aaron helped Moses, only in a much less significant and powerful way. I drive to UConn a lot! (Go Huskies.) What? Oh, yeah.

Alternative post titles: Don't Try This At Home, or Buckle Up, It's Going to Be a Bumpy Video or Angels Watching Over Me
Posted by Rini at 8:17 PM

appreciate the choice of musical accompaniment.

(i like to think of my car during a later line of same song: "the dashboard melted but we still have the radio.")

(opps--i guess that is being sung in the background of this selection--couldn't hear it the first time.)

Your noticing, being able to decipher, and appreciating the connection is the highlight of my month so far.

Can I just say, though: I was aware, but not in control. This song just happened to be playing on the radio at the moment I was videotaping my dashboard. I didn't expect my faithful viewers/listeners to be able to catch it through the bad quality a/v transfer. Figured it would be one of those solo special moments. So, kudos, and thanks for sharing.