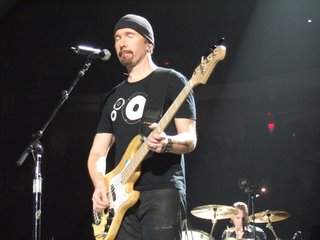 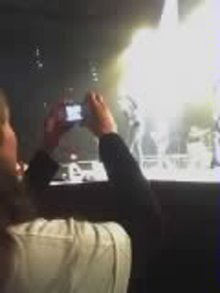 Every night should be like this one, standing in the front row inside the elipse, right next to the stage (Adam's side) for two and a half hours of brilliant U2.

Some things that just worked out perfectly -
- Everyone in the front of the line who'd been waiting all day (like Karin and I) made it into the elipse (even with random entries based on ticket scans, which several times almost didn't work out for us, but then did) and we all lined the front of the stage in solidarity and semi-friendship.

- I asked Karin what song she wanted to hear, and she said "Gloria," which seemed like an unlikely choice (from U2's least known album, from 1981). I don't think either one of us had ever heard it in concert before (this was my 11th U2 concert in 14 years). Their third (? maybe fourth) song tonight was "Gloria"!

- A woman I interviewed in a Dunkin Donuts while we sought respite from the single digit, windy, bitter cold about 8 a.m. this morning, who was attending her 37th show of this tour (I asked her how she could afford to do it, and one of the tips she shared with me was, "I don't pay rent"; I'm looking into that tactic for myself now) brought her seven-year-old nephew. They were right up front and center, and Bono brought little Jacob onstage to sit with him and shout "No more!" for part of "Sunday, Bloody Sunday."

- A family of four attending with parents, an adolescent girl and maybe 10-year-old boy brought a photo of the girl dancing with Bono in a previous show, hoping to get it autographed, which a roadie helped make happen while we waited inside the elipse.

- In commemoration of the 25th anniversary of John Lennon's death, U2 played parts (or wholes) of at least four Lennon/Beatles songs, which is always a treat even if they don't get the words or sometimes rhythms right.

- One of the encores included my favorite song from the previous album, which they hadn't sung at the last show I went to in October.

- Mr. & Mrs. Drunky Drunkerson crowding in next to us at the end of the line on the barrier in front of the stage didn't distract me too much, even as they loudly (and unnecessarily) yelled "Bono!" every 15 minutes and spent most of the last two encores arguing about whether or not they should leave now.

- I actually got an hour or two of work done on the harder one of my two papers due next week (Asian Philosophy) while waiting in line inside the Hartford Civic Center, and I was sandwiched between two philosophy grad students (Karin and a guy behind me who's currently a baker, but has an undergrad degree in religion and takes occasional grad classes in Massachusetts in philosophy). He talked with me about the Tao enough for me to realize I'm never going to be able to pull off a great paper, but I did take notes on two books before taking all my stuff out to the car before we got let in the arena.

- Two big Connecticut union security brutes standing between us and the stage cracked me up - one was excited that he got a copy of the set list before the show, and another, who was trying to look bored and severe most of the night, snuck a photo of Bono on his camera phone during one of the final shows.

- Karin took about 350 photos, with the last slot on her memory card filling up at the last moment as Larry said goodbye and left the stage, which was the perfect end of the experience for her. I took about 6 grainy photos on my camera phone, which was more than enough for me.

Hey,how come no comments on this entry? Sounds like it was a really great concert. We just saw a little bit from the Chicago concert at the end of the half time show of the RoseBowl game