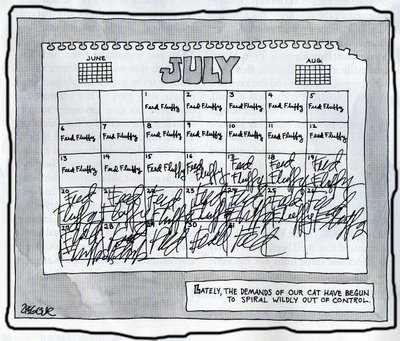 I don't always get the New Yorker cartoons, nor think they're especially funny. But, often they're kind of hmm-y or ahhh-y, if you will.

This week Buddy and Sissy and I are cat-sitting our friend Heidi's sister's cat Vassili (aka Bubba Jones). Bubba weighs in at around 20 pounds, walks and looks a little like a pretty orange tiger, and has spent the majority of his three days so far with us hiding in the closet.

He's a big fat ol' scairdy cat, and while it's a little understandable because Georgie (weighing in at maybe 8 pounds, probably more like 6) hisses at him, and Buddy bounds at him like a panting puppy ready to play... seriously. Get a grip, I want to tell him.

So I've managed to coax him out for a few minutes at a time in the evenings (he seems especially confident to come exploring when the TV is on). I try to help him expend a little energy with a feather toy and scratching post, since he mainly sits and hyperventilates with fear between my boots and dirty laundry in the closet. These evening sessions have cut down a little on his major neurosis-inducing problem which is that he gets up and roams the apartment between 2 and 4 a.m. crying like a baby and won't let me get anywhere near him to comfort (or shut him up). I wish he'd just play with Buddy and enjoy himself while he's here on vacation. And I wish he'd let me get some sleep.
Posted by Rini at 8:20 PM