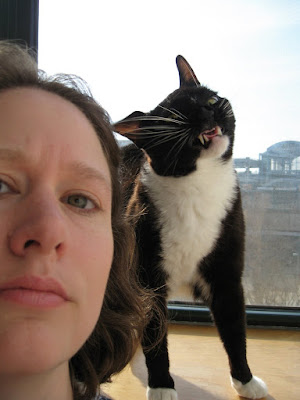 Apple & Tree: Me and my neurologically challenged Buddy.

I have a benign cyst the size of a thumbnail in my brain. The medical professionals in my life say it's probably been there for years, isn't pressing on anything, and needs no further attention except for a follow-up look in three months. (I got the impression that was so I wouldn't sue them if in fact my head exploded in the meantime.)

I also have an amazing set of pictures of my brain, including the spot in several shots, that I'll be scrapbooking this weekend. Oh, except for the part about scrapbooking.

(Oh, I also have "minor sinus disease" and a couple polyps in my sinuses, but who's counting?)

Along with an enormous entourage and a message of peace, the Pope brought with him to the United States a lifelong love of cats.... His house in Germany [has a] garden guarded by a cat statue.... And Benedict is, without a doubt, the first pope to have had an authorized biography of him written by a cat [“Joseph and Chico: The Life of Pope Benedict XVI as Told by a Cat” (Ignatius Press, 2008)].... Ms. Fredericks [cat-loving Catholic fan of the pope] said she thought that the pope would benefit from continued contact with animals. “I think every church should have a cat colony,” she said. “But I don’t think that will happen.” 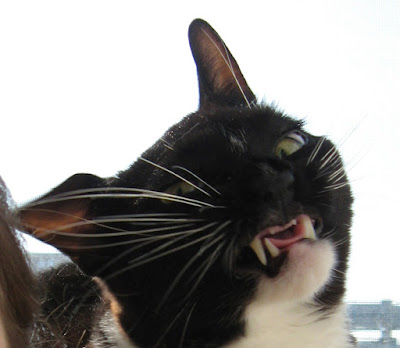 Your catty looks a little possessed but what do I know?....

Sometimes I think I have some sort of tumor in my head when I inexplicably have a ridiculous shooting pain just in one tiny spot but since I'm against going to the doctor, I'll probably just die comfortably on my couch reading Better Homes & Gardens.

ya i like this photo of bud cuz it's so "layered." it could be him being the naughty kid that has to make a face in the back of the group everytime a picture's taken. it could be him acting out his brain damage. but the truth is, he had literally just bit the top of my head (lightly) before i snapped the pic. maybe he was trying to get at my brain lesion to protect me from foreign invaders. wait, this was taken before the head drama... maybe he gave it to me. whatevs.