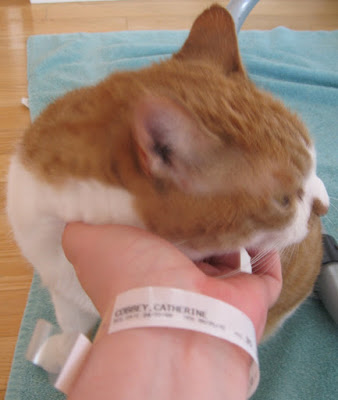 So I canceled a class today because my doctor scheduled a CT scan (when and why did they stop calling them "CAT scans"?! So mean!) as retribution for my not feeling all better after two rounds of antibiotics for a sinus infection. Have I mentioned my special condition: meta-hypochondria? It's where I think I have hypochondria, but I don't really. So I feel guilty going to the doctor because I'm afraid I might not really have the symptoms I have. I told her about this. She gave me a look. She is 12 years old and has not yet developed a sense of humor.

Did I mention my other for serious condition: hospital phobia? Well, happily, at the hospital I visited this afternoon they're nothing if not efficient, probably exacerbated by the technician's recognition that even though I was in for a common, non-invasive procedure that would last less than three minutes, there was a good chance I was going to pass out while there because sometimes I forget to breathe.

Speaking of efficient. So, I was anticipating hearing back from my doctor in a couple of days, at which point she would tell me what the CT showed and send me on to a scheduled ENT appointment one month from now.

She just called. Two hours. Turns out when they take two days to get back to you with results it's not that it takes them that long to look at them. They're just making you wait because, why not?

The radiologist was, I quote my GP doctor (the 12 year old without a discernible sense of humor) "unimpressed with the sinus infection." We don't know what that will mean for dealing with my ongoing symptoms - probably schedule me to see an allergist down the line. But, it turns out she saw something in my brain she wants to look at some more - the radiologist, that is. My brain! Well, that explains things. Not my symptoms, per se, but things none-the-less. So I now have an MRI scheduled for my head tomorrow morning at another hospital, at 6:30 a.m. Blech. I wasn't planning to leave the house until noon because my campus schedule was morning-free.

The nice thing is, I'm sure it's nothing (but I'm not sure if that's a symptom of my meta-hypochondria or not!). But I'm a little annoyed (a) at their efficiency (I wouldn't have had to cancel my class - coulda started half an hour late and not messed up the end of the semester stuff, if I'd known I'd be in and out so quick), and (b) that my sinuses are "mostly clear" when I've been under the stoopid weather for nearly two months now. (I don't like to have infected sinuses, just like to have an explanation for why I'm sick and a clear path for how FIX IT.)

Fortunately, I watch "House," so I know what to expect with procedures like these: they'll keep escalating in seriousness as doctors war with each other about what's killing me, my condition (meta-hypochondria and hospital phobia) will worsen until I nearly flat line from their giving me the wrong treatment, they'll consider and rule out "lupus" until one of the characters says, "it's never lupus," and then it'll turn out I have a small toad ingested in my brain (I watched 1970s SNL "Barber" sketch, too) that, when removed, returns me to full health, with a paid-off mortgage and completed dissertation to boot.

(While typing this up, the doctor called again, and now I also have to call and pre-register with the hospital tonight like I'm having surgery or something. Did I mention I'm grateful to have insurance?!) 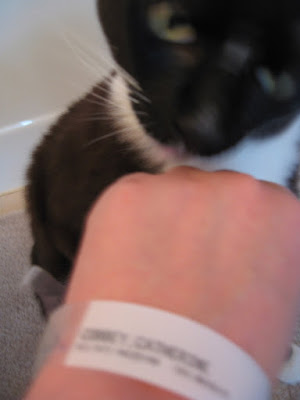