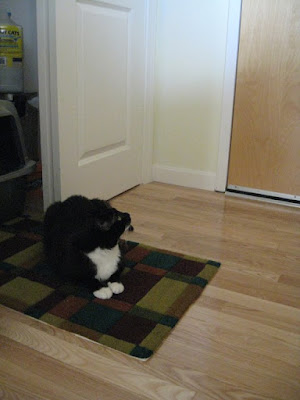 We haven't really talked about it yet. 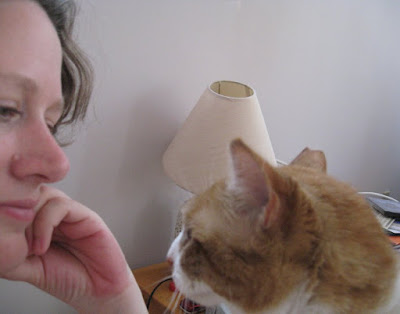 How I'm going to be gone for ten days. How they need to be a good boy and girl. No seizures, no fighting. What they want me to bring them back from the Land of Ire.

But he knows. Buddy spent the greater part of the day seeking comfort in the most primal of ways. With the box.

Before I left for work, I found him lying in the litter box. Inside. Just lying down in there, gazing out its entryway. Denying the precarious world outside the box. He could smell me thinking about packing. I'm sorry: I had not scooped the box yet for the day. He's just that wary of the future. 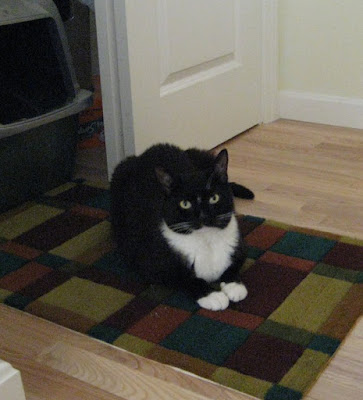 It's a long time to be left to the wiles of a Condo Without Me. It will be the longest I've left him (he usually comes along if I'm gone over a week) since his first summer with me, when he was still very much a violent, volatile, literal crack baby and I went to London for my first taste of Europe. I hated it and wanted to spit it out. His Aunt Shawneee kept him safe, living in our old house with us. With him, while I went away.

Now I'm going back to give the old world another try, and no one is staying with him except his sister. Who hates him. With the neighborgirl coming over twice a day to pill him, feed them, water them, scoop the (security blanket) litter box, pat them on the heads. And he's very sad about it. 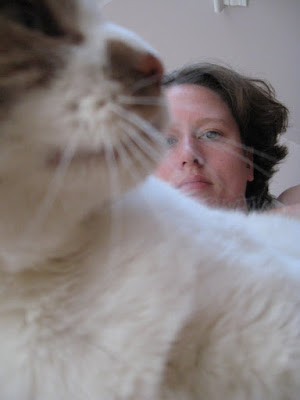 I know her addiction to the human being. She'll be fine as long as neighborgirl pets her twice a day. He? He'll be heartbroken because nobody loves him like I do.

Well, I know what Luther's response would be regarding the catties little souvenirs from Ireland: "Thistle & Shamrock! Well are we done yet, love!" the former referring to the NPR radio show and the latter to a line from "P.S I Love You" both said in a ridiculous brogue. The quote from the movie doesn't make sense in this context, I know, but he insists on saying it every other day even if it doesn't fit in the context of the conversation and I KNOW he would've said it in this particular conversation.

Oh, and just in case you haven't seen the movie (which you probably have for a class or something...), the hubby who- BUM-BUM-BUUUUUUUM- dies (I hope I didn't spoil it for you...) is Irish hence the brogue.....