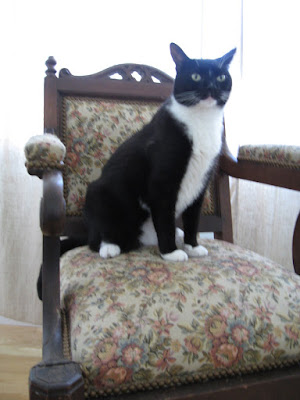 Post Table of Contents
Section 1: Moral of the Story
Section 2: The Story Before Pictures
Section 3: The Story Continued With Pictures

Some of you will want to skim section 2.

The Moral of the Story: Always travel with a friend who can find cool stuff for you, and you for her; remain open to the input and help of others, even if they overly confidently suggest something you just tried and found failing; don't measure things before deciding whether to buy them; and be willing to ask to borrow a screw driver from someone who is actually trying to sell not loan it for free!

The Pictureless Part of the Story
We wandered around the flea market for a couple of hours this morning, admiring kitsch, families, nostalgia, and possibilities. (Shawn also named all the breeds of the many dogs we encountered. But that's not part of the story. I also don't have any pictures of that part.)

Shawn was looking for a ring. A nice, unique ring for $50 birthday money.

I, who really am usually (and happily) just along for the ride on our adventures like this (my contribution to the social calendar this fall was to suggest we attend a high school football game in October; my sister, mother of two teenagers attending the #1 ranked high school football school in the nation, assures me it isn't creepy for non-alumni, non-parents, non-h.s.-teachers to attend; I'm going for the nachos and nostalgia; do they serve nachos at New England high school football games?! At least they should have a marching band. Right? Oh, but I did take us to an art gallery after the flea market, so never mind). . . I announced cheerily as we left early this morning, "I'm going for a bike and furniture!" I'd been thinking about buying a bike for awhile, but not seriously planning to pick one up today. And, I don't need any furniture, but I'd just been admiring a corner shelf unit Shawn has in her dining room, so I thought it would make a nice focal point for me on our trip. I wasn't really looking for furniture, just company and society.

But we weren't finding any nice rings. I kept flirting with a spinning globe that lights up and an unpleasantly framed supercool old map of Boston Harbor, but neither one was priced to sell (to me).

Then I said to Shawn, using my subtly-toned "I'm serious, not ironically pointing out a hideous piece of never-fashionable trash" voice, "I think you will want this." It was a very nice old camera, in amazing shape -- inside the case, the camera, etc. -- for its age. She loved it, bargained it down to just slightly more than she should have paid, and had her find.

We wandered around some more, then she said, "Wow! You must love this!" And pointed out a contraption I'd never seen before or known existed, but didn't even bother bargaining down to just slightly more than I should have paid. It's a library-step-stool-arm-chair. Apparently they exist.

The professional-garage-saler cleared it of the books he was using it to display, showed me how it folded over, assured me it would hold me if I climbed up the steps (it did), and pointed out how it was broken in a few spots and imperfectly mended. I gave him all the money I had in the world (of that time and place) and we distractedly wandered the rest of the flea market until we admitted out loud that we were both a little concerned about it fitting in Shawn's car.

We have a history.

A few months ago we drove a couple of hours west to visit a huge warehouse of letter press equipment. I didn't even know it existed, but Shawn took a class. On the way back, or maybe a little way out of our way, we stopped in a thrift store and I fell in love with a very comfortable green chair. For quite a bit less, I must say, than what I paid for my new ladder-chair. But it didn't come with its own step stool so. . . . But, being two hours from home (so not inclined to find alternate forms of transpo if needed), we used the measuring tape Shawn carries in her purse. For such a time as this. We measured all the several widths, lengths, and heights of the chair. We measured all the openings of the car. We calculated. We did not purchase the green chair. One or the other of us thinks of it and brings it up at least twice a month. Semi-monthly, even. Except for its size (or the size of Shawn's car door openings), it was a perfect chair for me.

I had paid the man for my new chair-with-steps. We had not measured. We drove Shawn's car as close as we could get it to the row with the library-chair-ladder-man's stuff, including my paid-for chair. I won't tell you the part about how we wandered up and down a couple of rows before we found him and my chair again. It was pretty close to the car. The chair is made of solid walnut (he says). Shawn said this would be heavy, but we're two strapping women. I didn't tell her or the man I'm not so strapping. (I just looked up "strapping" on dictionary.com. I changed my mind. I am strapping ("large, whopping" in sense #2); Shawn is strapping ("powerfully built" in sense #1). So, we're good.)

We carried the awkwardly constructed chair (it has folding and flapping parts) to her car.

The Part of the Story With Pictures

And then the comedy began. We tried it front first. Sideways. Back first. Front seat. Back seat. We cleared everything out of the trunk, and there was a lot of stuff in there (I didn't take a pictures, because I sensed Shawn's issues with this part of the story). We tried it frontwards, backwards, sideways, in the trunk. Nine days old. 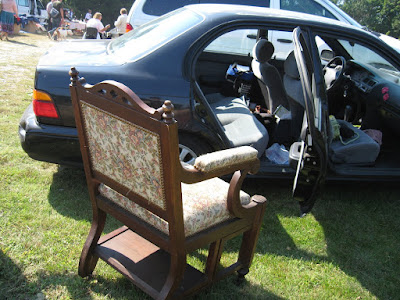 And friendly, helpful person after friendly, helpful person stopped by. Offering to help. Suggesting we try another way (almost always the way we'd just tried). Several saying they do this for a living ("I move antiques"). One man suggesting I could rent a trailer -- just add another $10 to the cost of the chair. I do not believe I could get a Uhaul trailer in this northern town and use it to bring my library-chair-steps down to my house in my southern town for $10. I did not call him a liar, because I believe he meant well. The little Italian man running the booth right next to where we were illegally parked kept insisting we just tie it in the trunk. "It not going nowhere! I know! You drive all the way to New York, it not go nowhere!" We had no rope; I had no hope. I asked to try it one more time on its side in the back seat, just for my sanity before she went in search of rope and I pictured it flying off the back of the car for the whole drive home. 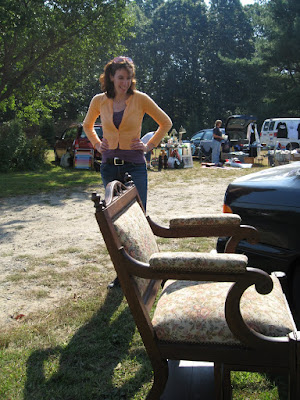 We tried it in the back on the side again, and a nice man stopped by to give us more advice. It has hinges, he said. Yes, Shawn said, but it's still too wide. I said, "It's so close, let's try to take the bottom step part off the hinges."

The nice lady let us borrow a screwdriver she had displayed on her flea market table with other random tools (how much were they asking to sell that single, used, simple flathead screwdriver for?!). 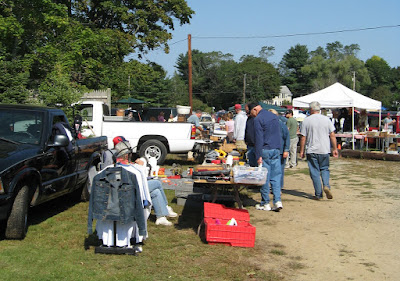 The steps came off. The chair went in. It's a beautiful thing. After brunch in a cafe in Salem and visiting my friends-colleagues' home-which-doubles-as-an-art-gallery open house and (both of us) buying art for other friends, we parted ways, I inserted the chair-in-two-pieces in the back of my car, drove home, brought it upstairs, screwed it back together, and: voila! 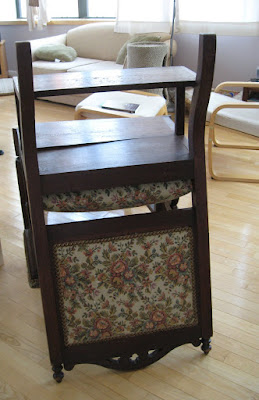 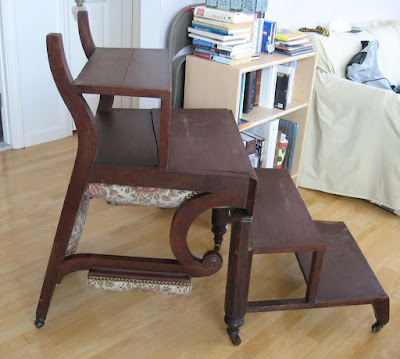 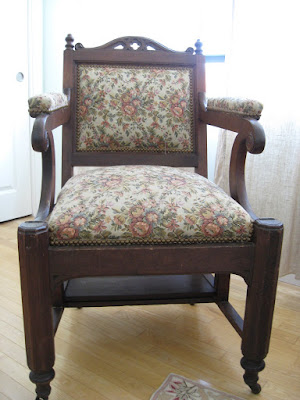 I haven't figured out yet where I'll put it or what I'll use it for. 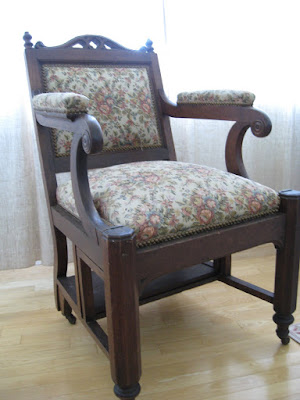 Though I do have excruciatingly high ceilings and light bulbs that consequently have been burned out for over a year, I don't have bookshelves up high (and the step stool is not only not nearly tall enough for me to reach the bulbs, it also emphatically must only be used in library-like climbing activities). 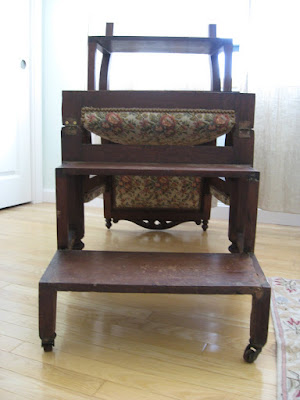 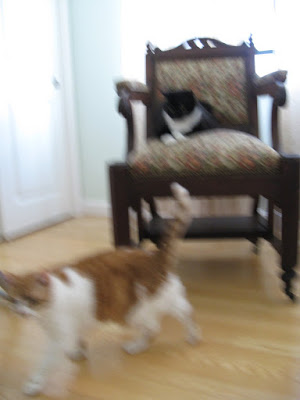 It's a beaut and I'm pleased as punch and a pickle. 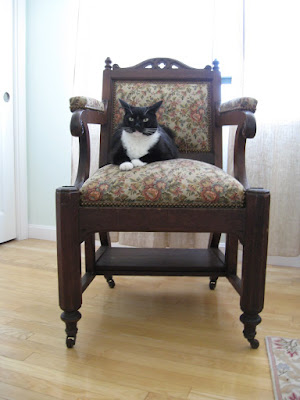 I also found a scary looking bug on it, which I brought to an end, and vacuumed up some other animal's hair off it, but it could use some more cleaning. Which makes it fit in just fine in its new home. 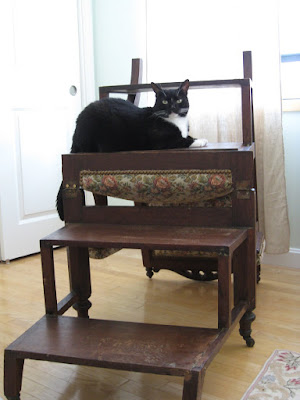 Also, it has wheels (Shawn says "casters"). I love furniture with casters.
Posted by Rini at 3:30 PM

That is an awr-some chair! I love things that have more than one use!

I am LOVING the chair. Makes me wish I had a library (OK - a liberry) in my house just so I could have a couple of those fancy chairs and one of those long ladders on wheels. Then I could sing sweet, flirty songs and dance and whirl and twirl about my liberry like they do in the old movies where spinster liberrians find love with the handsomest band leaders in town.

(Don't shush me now - I'm dancing amongst the tomes with the handsomest bibliophile in our fair hamlet... in my mind.)