Paul Newman was not my grandfather

He was like a grandfather to me in some of the ways my two biological grandfathers were, and some they were never.

I did not meet any of the three men I've called "my grandfather" for most of my life. I knew them only through stories -- told to me, read by me, imagined by me -- and through pictures, still and moving.

My brother called me while I was meeting with a student in my home this morning. The only reason I took the call and interrupted our independent study class time was because I feel like we're all sort of experiencing heightened sensitivity to being available and connected to each other now, almost three months after my dad died while four of the five of us were relatively unavailable and disconnected -- out of the country and away from my mom, who right now herself is out of the country and out of communication for a couple of weeks. He asked if I'd heard the news. When I didn't respond like he expected or hoped I would, he transitioned into it: "Paul Newman." "Oh, did he die?" He'd just heard on NPR and called me. I said I hadn't heard, but I knew it was coming. Then I went back to work. It was providential that he called then, and that I, after initially silencing the phone to put it away, decided to take the call, as later in our session I brought up a news site online and would have been confronted with the headlining words and image, and I don't know how I would have responded with my student there to news that my sometime-someway grandfather Paul Newman had died at 83.
I met Paul Newman through the medium of my family's little TV set and late-late-night programming in 1984 or 1985, in the living room of our house in Kota Kinabalu. I met him once or twice at sleepovers with my friends LuAnne and Lois and Alex and Christa. I grew to love him alone, as I'd stay up late when my brothers and parents had gone to bed. I have no idea why Malaysia TV -- we had two channels when we first moved there, three by the time we left the country, sharing time and airwaves between programming in four languages: Malay, Chinese, Tamil, and English -- played 1970's and 1960's Newman flicks around midnight.

I saw "Harper" and "The Drowning Pool," possibly "Butch Cassidy and the Sundance Kid," "Buffalo Bill and the Indians." I think I saw "The Towering Inferno," maybe "Cool Hand Luke" and "The Sting" in this time, but I don't know in which country, what home, I ended up seeing most. Maybe I only saw "The Drowning Pool" and "Harper" in Malaysia. But I know I saw each more than once, in the dead of night in our tile and rattan living room. I remember each scene, the melodramatic staging and interactions, the deadpan sarcastic delivery, the beauty of the face, eyes, actor, character, man.

Back in the States, I checked out "Hud" and "The Verdict," "The Left Handed Gun," "The Hustler," and most of the rest. I saw "The Color of Money," and eventually Newman's non-present Oscar win. Sometime in high school I saw Newman's 1958 "Cat on a Hot Tin Roof," and then I saw it again at least once a year for the next probably 15 years. By the first scene, I was in love.

But I was in love with him as my pretend adopted-grandfather. When did I decide that, because I'd never had a chance to meet either of my grandfathers, both dying of heart attacks young, years before I was born, I should get to create my own in a currently living figure I never visited, talked to, knew? When did I begin to relate to him the way I related to my grandpa Luther, Dad's dad of whom he'd tell so many inspiring stories that I knew him to be the spitting image of Atticus Finch?

My grandpa Luther W. Cobbey was a multiply-decorated war hero from WWI, a lawyer in the deep south in a time of deep racial divide and oppression, a generous, reconciling, well-respected man who modeled for my generous, humble, much-loved and respected father what it meant to live with others with integrity. My dad told a story of the response of blacks in the Tampa community to his father's funeral which I always pictured as the scene in "To Kill a Mockingbird" when Rev. Sykes says to Scout, "Stand up, Miss Jean Louise, your father's passing." My grandpa John Newgard, my mother's dad, was less present to me in my childhood because my mother is less of a storyteller than my dad. But I knew he worked hard, did the grocery shopping, made an ice skating pond for my mom and her sisters and brother in the cold Minneapolis winters.
Somewhere along the line, I came to know, and seek to know, all this and more about my grandfather Paul Newman. I thought he made a great grandfather figure for me, a generous, vibrant man, made up in my mind of the personalities of his intense, funny, sharp film characters, the narrative of his charity, his visits with David Letterman, his racecar addiction, his long-lasting marriage, his tragic loss and larger than life donations, and his own-personness-outside-of-the-celebrity-system vibe -- while one of the biggest celebrities over five decades worth of fame.

I knew, funnily enough, he didn't become a grandfather until much later than many of his generation, with his children producing only two (non-imaginary) offspring to give him that special relationship I imagined him filling for me. I was in my mid-20's by the time my grandfather Paul became a grandfather himself.

I knew his birthday was Australia Day, January 26, and I still note it every year.

Paul Newman was one year and just under a month younger than my dad.

I watched them age together. The sagging, blotching skin, the fading blue eyes, the loss of hair, the feebling of build and movement. I wondered, earlier this year, when he was in the news as ailing, what it would be like for me when Paul Newman died before my dad.

But then, he died three months after him. And I'm still not sure what it's like. I know that I am sad for his wife and his five children and two grandchildren in ways that I know more intimately -- the sadness -- than I did before. I'm sad for those who knew him through time and conversation and touch. I know that I am sad that if I ever have children, they will know their grandfather Max only through stories the way I knew my grandfathers, real and imagined. 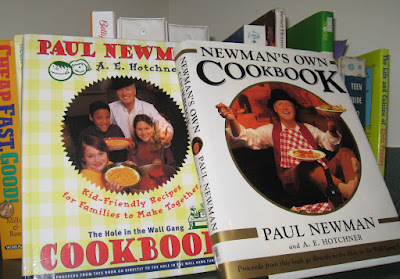 I have a book-length study of celebrity death in popular culture that I always believed I'd finish and publish before my dad died, even when my academic commitments took me in a whole other direction. I could apply a series of theories and systems of analyzing and predicting the public response to today's news. But, if you came here looking for a moral of the story, some insight into culture and society, or something funnier than me calling an actor a year younger than my dad my grandfather, I will disappoint. It's just me, still grieving my dad, and mourning Paul Newman, who was but also was not my grandfather.
Posted by Rini at 11:32 AM

- Cat On a Hot Tin Roof (HOT!)
- His Balsamic Vinaigrette
- Those piercing blue eyes
- His tasty and delicious way of giving made me feel good about buying his popcorn and salad dressing.
- The way he loved his wife. I especially liked when asked why he didn't cheat, he said, "Why go out for hamburger when you have steak at home?"

I think this calls for a little in-home Paul Newman Film Festival - on the big screen TV.