“I think it’s time for her to go to kitty heaven,” my mother said.

But she was my pretty good girl for eight and a half years. Needy, grumpy, never a great self-groomer, but always a great self image. 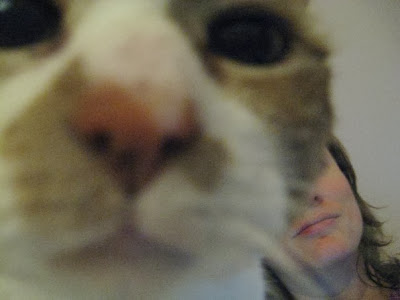 I adopted Georgianna from my Buddy’s vet, to be a companion for him. But it turns out if there was one thing for sure about George, it’s that she was not at all a cat person. She hated the feline race with frightening venom. Except for once or twice I caught her snuggling Boo, but I’m pretty sure those were mistakes. The vet had taken her in from a rescue agency who’d collected her off the streets, named her Smudge, and estimated her age at between 3 and 5 when I claimed her. She was social and snuggly. Sometimes too snuggly. Some of you remember her habit of patting your face to get you to pet her. She used to jaunt back and forth between people whenever more than one was in a room. Jump up on one, get some loves, then off to the next one. Sometimes she’d sit in the middle of the room to be the literal center of attention.

She was a terrible traveler in her youth and middle age, yelling and gnawing at her carrier whenever she was in a car. When I drove down to Texas for my sabbatical, I had learned to let her out of the cage and she was fine riding free in the car for three and a half days. After Buddy died, I stopped leaving George with super kind friends in Massachusetts when I’d go on a trip and she had to learn to fly with me. She was not the sweetheart Boo was, but she did fine, and I got myself an anti-anxiety drug prescription.

To her friends and family, well mostly me, she was my George, Georgie, noodle, bug, bunny, snoopi, naughty kitty, sad kitty...known for her Pig-Pen-esque qualities, her raspy voice, and her companionship.

Perfectly healthy for years, she lived with pain, sickness, and confusion for the last few months, wasting down to four pounds. Through it all she always seemed to like me, and I liked her an awful lot. 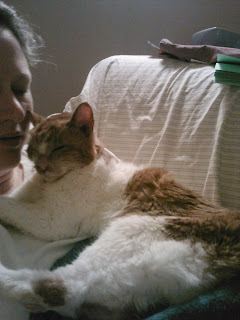 She was a pretty good girl.

I’ll be okay after awhile. I let George go to kitty heaven. 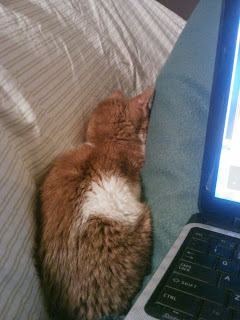 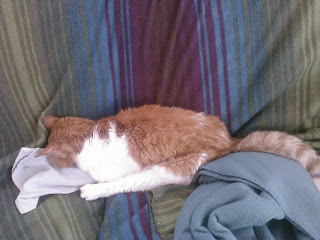 Me and the Devil said...