The Campaign: "How's My Hair?"

In 2012, I wrote a series of movie reviews to coincide with a "Faculty Film Series" I produced on Elections and Presidents at my former academic institution. Here's the crankiest one I did.

The Campaign. Dir. Jay Roach, 2012.
Love it or hate it.
There. Now that I’m done with my review of the new movie, The Campaign, I shall move on to some more interesting business at hand.
Oh, sorry. You were expecting more? Really, don’t. 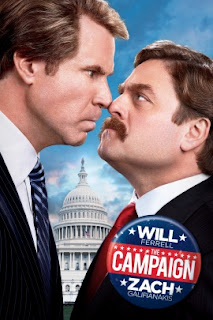 The Campaign is a Will Ferrell and Zach Galifianakis comedy directed by Jay Roach. If you’ve seen almost any Roach-directed (Austin Powers, Meet the Parents), or Ferrell (Anchor Man, Talladega Nights) or Galifianakis (The Hangover, Due Date) -acted movies, you have a good idea of what to expect from this over-the-top, crass, stereotype- and cliché-driven story of a couple of sometimes sort of well-meaning doofuses running against each other and the system for congress.
Roach, Ferrell, and Galifianakis are each talented and successful moviemakers and performers, capable of nuanced, thoughtful, and, I would argue, culturally valuable work (see, just for one example apiece, Recount, Stranger Than Fiction, It’s a Funny Kind of Story). The Campaign is not one such product.
The story follows incumbent North Carolinian congressman Cam Brady (Ferrell) as he faces a series of scandals jeopardizing his run for reelection. Enter Marty Huggins (Galifianakis), conservative, naïve, and awkwardly lovable pawn in billionaire businessmen the Motch brothers’ (John Lithgow and Dan Ackroyd) plot to manipulate government regulations. The two campaigns one-up each other with increasing horribleness (and success) in their bids to win.
The Campaign gives us a tightly paced script built on a rhythm moving from endearing moments of empathy for underdogs to fart jokes and in-our-face offensive scenes of children describing unhealthy sexual experiences – all loud, exaggerated, and then over quickly enough that we can laugh and move on if we don’t get mired squirming in discomfort. Ferrell plays a familiar character, the cocky, popular guy who’s not as smart or together as he looks, while Galifianakis gives us his socially and physically awkward outlier who’s sometimes deeper than his shtick.
The script offers one relevant, contemporary reference after another (clear nod to the billionaire Koch brothers’ underwriting of apparent grass roots politicians, easily swayed masses, empty rhetoric) and running sight gags (out of control politicians competing to kiss babies, anti-hero so dumb he can’t work a doorknob).
All maybe true, but not at all insightful or particularly creative in treatment. A bumbling idiot might be funny in contrast with his surroundings and situation if the bit reveals some insight into self or culture (see Mr. Bean at the Olympics). But it offers little when it’s just a repetition of gags in the context of redundant juvenile taboo-breaking.
Full disclosure demands I admit Meet the Parents is on my most-hated-movies-I’ve-ever-seen list and I didn’t find The Hangover (or – controversially! – its gender counterpart Bridesmaids) enjoyable. The most interesting thing I noticed about The Campaign was this R-rated film ran attached previews for Nickelodian and Disney produced movies, appealing to the under-17 cravings in its audience at an over-17-rated movie. The Campaign doesn’t aspire to leave us reflecting or conversing, but Roach, Ferrell, and Galifianakis give us what their previous box office numbers (and the frequently LOL’ing audience I saw the film with) have voted for many terms over.
It’s a presidential election year, and a little exploitation of the current cultural happenings can’t be all bad. There are quite a few politically themed movies out there that take us a little deeper than The Campaign attempted to go.
(From original 2012 post; included here for context. This fall’s Faculty Film Series goes there. I’ve selected from dozens of great options four films on the theme of Elections and Presidents, including some familiar and some less known, some serious and some sometimes silly. Over the course of the semester, we’ll go to 1970’s U.S., 2000’s Iran, and a couple settings in between, to enjoy creative, thought- and conversation-provoking film treatments of democracy in action (and comedy). Join us for screenings and conversation beginning with Iron Jawed Angels. This contemporary dramatization of the last days of the women’s suffrage movement in the U.S. reminds us what it cost in the past for us to vote in the present.)