Once upon a time there were Girls Who Became Lions

"Whoever was responsible for sending a championship team into virtual obscurity was either a serious egomaniac or just plain mean."

In 2008, the girls soccer coach at a small Ohio town's high school learned that 25 years before, the school's very first girls soccer team won the first state championship. She didn't learn this as a girls soccer team member at the same school less than a decade before. She couldn't learn it from the school's trophy display cases or non-existent banners hung in the athletics building. She learned about it from listening to the state champion team members eulogizing their champion coach, whom she'd never even heard of before the day of his funeral in 2008. When Girls Became Lions is a mystery focused on uncovering the story behind a coverup born of omission and commission. 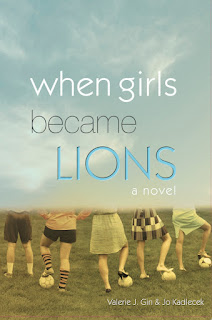 What hooked me and got me pulling from the reader sidelines, is the fact that a championship story wasn't known. When Girls Became Lions is a story about an untold story. Rather, a story untold: it requires effort to resist the natural human intuition and practice of telling our stories. Crafting, refining, sharing, and expanding on a narrative of heroes who make goals is as essential to human experience as eating and exercising and earning a living.

Especially irresistible are stories that highlight firsts of their kind. When that first surpasses every common expectation and passes every obstacle along the way, and it is a public process, it becomes myth. This kind of myth is a popular story society tells itself about itself, over and over.

So when that story, one of glory, not shame, is not told over and over, in vivid verbs and pictures, I want to know why and how! We know what: It's 1983, thirteen (!!!) years after Title IX becomes law, mandating that schools must offer athletic opportunities for girls and women as they do for boys and men or they will lose government funding. And when this school started shuffling toward compliance, their championship first season creates a space for a reluctant community's enthusiasm and support for more girls sports.

We can too easily recite the mythical reasons such a championship might not have received equal community respect or even attention as a boys win would. Popular perceptions about identity, difference, equality, ability, and value, even truth, evolve over time. For instance, while women's sports have been included in the Olympics since 1900, it wasn't until 2012 that every sport (and participating nation!) included women. In 1983, Title IX was nine years old and many schools hadn't begun to comply. Women in the U.S. have had the right to vote for nearly 100 years, and in 2016, just about 20 percent of Congress members are women.

Lessons aren't necessarily learned with success. 2008's high school girls soccer coach ends up dealing with a lot of the same issues 1983's first coach did, including players' readiness and approaches to being on the team, school administrators' support, and community participation. Maybe -- almost certainly -- if the championship story had been told and retold every year the community would be stronger, not basically in the same place it was 25 years ago, before championship. Familiarity would gradually build confidence. What and who we know (and know about) make us stronger.

The story of a first team's first state's championship is really too much character, conflict, goals, and pursuit (the elements of story) to be missed. It disrupts too much to be overlooked. So, the story untold is a provocative, challenging, and ultimately motivational story to be told.

When Girls Became Lions is suspenseful, enlightening, and infectious,  And that's enough. Readers (athletes, coaches, parents, school administrators, and fans) will be on the side of the break-through characters and will learn some crucial history about the world's most popular sport and the many players and moves it takes to make sports truly social. But there is more: it's a mystery and revelation about the power of storytelling in healthy communities and society.

Disclosures: I am friends with and a former colleague of the authors, know more names of USNT soccer women than men, have never actually played formal team sports, and have kind of a thing for learning stuff and for storytelling.