Listing Some Books, Episode 2: You Can't Touch My Hair and I'm Judging You

Podcasts and #hashtags, newsletters and friends, books on cool topics and shelves in bookstores -- these are a few of my fav-or-ite things that move me to add new titles to my array of "to read" (and "to check into and maybe read but also probably not") lists.

This week I am blogging a few books from my current (March 2017) lists. In our last episode, I reported finishing reading Jane Mayer's chronicle of billionaire buried politicking in Dark Money. Now I am thinking about titles that haven't even made it to my bookshelf yet.

2a and 2b. Wikipedia Brown's (@eveewing) #ActualBlackWomen favorite books thread on Twitter:

a. You Can't Touch My Hair: And Other Things I Still Have to Explain. By Phoebe Robinson, with a highlighted forward by Jessica Williams.

I feel like I shouldn't have to explain what the book is about, since I have provided the title and I have no more read the book than you have. Possibly less. Eve's invitation for recommendations of (recent) books by black women brought out a few mentions of this essay collection. That and a few other points prompted me to do two things:

(1) Look it up on Amazon. Which, thanks to the seriously greatest thing ever invented - Library Extension - simultaneously tells me if my local public library has a hard and/or electronic copy available.

From the Amazon blurb:

"Being a black woman in America means contending with old prejudices and fresh absurdities every day."

This is probably a book I will actually read sooner than later, unlike most books on lists and shelves. The intersection of race and feminism and comedy put it in that sweet spot of levity + reality that feels like oxygen some days. Also its currency pulls me in -- both as a book I've seen mentioned in other tweets and lists since its release last fall and because the author's podcast, "2 Dope Queens" shows up as a popular and rec'd title every time I open my listening app. The pod's not on a list yet.

And, the double-edged rhetoric of "I shouldn't have to explain" hooks me like cat. I'm glad we do still sometimes love enough to explain when it seems like if we - the explanation needer - could pay real attention, we might already understand.

b. I'm Judging You: The Do-Better Manual. By Luvvie Ajayi.

Speaking of advice and explanations. This one showed up even more times on the Black Women Authors thread, and on a pile of Best of Last Year lists. It went right on another soon-to-be-converted "to read" list: the public library has a hard copy! 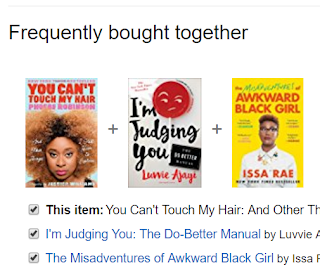 I ended up adding I think five books from the Wikipedia Brown twitter thread and scrolled by another five or so I had read within the last year, which probably got on the to-read list because of another #hashtag, conversation, or list. Including a few less recent but I-recommend ones such as Adichie's Americanah, my first (not last) Octavia Butler book Kindred, and Harriet Jacob's Incidents in the Life of a Slave Girl.

Tracking points for this week's "Listing Some Books" blog series:
Came across: via a call for recommendations by a writer-voice-woman I admire and follow on Twitter. Knew the names and titles from previous un-followed-up references.
Caught attention: because of intersecting of multiple points of interest for me: race, comedy, women, popular media, calling out b.s.
And then: Trip to the library WHICH NEVER FAILS TO WIN THE DAY.
Accessed: Might go audio on the first.