Listing Some Books, Episode 3: The Reluctant Fundamentalist and Edible Bugs

The Book Review, by The New York Times, is my most satisfying podcast habit presently. It has in-depth conversation about one specific book and author, followed by a roundtable discussion of several books, highlighting what the participants are currently reading, thinking about, abandoning, or paying attention to.

When I listen, I jot titles and authors down for future consideration. I may be moved by the topic, the personality of the author being interviewed in the first segment, or the presentation of emotional or intellectual response by the critics and readers in the last segment.

A few weeks ago, Mohsin Hamid's voice drew me. As he talked with host Pamela Paul about his latest novel Exit West, he sounded warm, self-reflective, sensitive to complex perspectives, and familiar. It turns out, I'd heard him in the car just a few days before on Fresh Air talking about his book with (the hypnotic-voiced) Terry Gross.

This latest writing experience, he said, was different for him because he told the story more than he wrote the novel.

I had probably written his name down before he finished his first sentence about that concept: story in relationship to style. I am a sucker for meta-art and -stories, especially when they're good.

So I checked the local library (via the super amazing wonderful Library Extension I've attached to Amazon and Goodreads), and found one of Hamid's earlier novels available for electronic checkout.

I am currently reading and about 25 percent through The Reluctant Fundamentalist. Subject-wise, in its story of a Pakistani man's experience of September 11, 2001 as a young business analyst in New York, the 2007 novel offers a lot for my tastes as a reader. Globalized identity, religious tension, academic-intellectual life -- all are topics on my lists.

Then there is the device. The Guardian called the narrator's voice (or its effects?) "quite mesmerizing." But so far I've felt more contrived at than engaged. The Pakistani man tells his story - so far - entirely as a one-side conversation with the American he encounters on the streets of Lahore. So far, I don't get it and I don't feel it, if it means some kind of transcendent novel-reading experience owing to the means of storytelling.

I know the story will be - it isn't yet, really - compelling in an inevitable way. It promises to be part love-story, but probably even more so friendship, betrayal, and an un-simply-named quality that any story of 9/11 (implying surrounding consequence) must have. But the one-voiced, excessive-conversation-based storytelling so far mutes the character for me.

For the first couple of nights I approached the book, I read a chapter each evening. . . because it felt like a Thing to Do. A device, almost, for reading the device. And the chapters are sensorily vivid with street and institution sounds and images and smells and temperatures. So I am there, at least for the moment. The character-voice is more than what he has shared so far, no doubt. And I can't deny the trustworthy personality that includes an occasional and funny throwaway Top Gun reference. It-he will evolve: he's nervous in the present, in subtle contrast to increasingly - if youthful - assuredness in the narrative's past.

So I have renewed the book from my library and will probably move through it with more speed now that I've come this far, in reading and reporting. There is also my comfortable resistance to judging a meta-style story's gimmick before the end. Happily I have experienced "that click" when in the end, the way the art was made, made the art just right in its final turns. Sarah Polley's 2012 documentary Stories We Tell rested that case for me when I viscerally went from "c'mon, what are you doing and why are you doing it" to "oh! yes" with the kind of force where I can still picture myself as I was watching. Maybe, then, the monologue-on-the-street novel and I will connect before I'm done.

Most nights this week I have also been listening to Daniella Martin read her Edible: An Adventure into the World of Eating Insects and the Last Great Hope to Save the Planet before I go to sleep. Given the relative randomness of its topic in my usual scope of interests and the quality of the writing, I'm thinking I must have picked it up as an Audible Daily Deal or some such recently. I cannot remember, and it was never On a List. But it's making a pretty interesting case and the author's dorkiness is growing on me and last night it made me nostalgic for my tarantula-eating days in Cambodia 13 summers ago and waterbugs in China not so long ago. 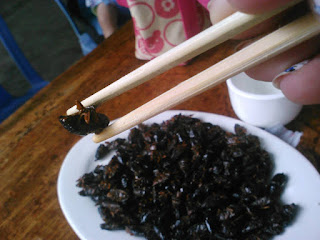 Tracking points for this week's "Listing Some Books" blog series:
Came across: via a podcast, a radio show, library availability, and probably a passing sale.
Caught attention: because of voice, religion, academia, and curiosity.
And then: Renewed to finish reading (and, in the case of eating bugs, will put on my Lifestyles to Consider list).
Accessed: Library, Audible sale.