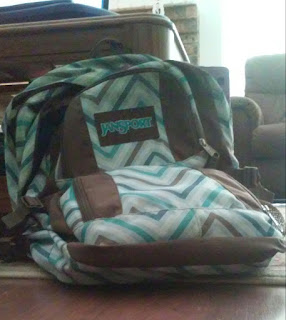 Thirty-eight of my forty-five years as a human being have included at least one First Day of School. Eighty-four percent. I didn't even live with a cat for that many years! For more than one of those years, I had First Days of School in two different countries. I've had the darn things in five states, on ten different campuses.

This time, I will spend the least amount of time ever for a First Day of School planning what to wear. I probably won't carry a backpack. But I am planning for some jitters, meeting new people, asking for help, and most likely taking a lunch break. And supper. Maybe midnight snack.

At the end of October, I start teaching an eight-week first year seminar online for SNHU. My role, in keeping with the distinct SNHU approach, is as a mentor and guide, weaving my knowledge, connections, suggestions, advice, feedback, and encouragement into the established structure of a "Perspectives in the Liberal Arts" course. My undergraduate, adult-learner students' average ages will be around the age I was starting my last new school, in 2004 at UConn, a bright-eyed doctoral student with two First Days of School (in two New England states) that fall.

They'll have more than one full-time commitment, probably kids and a job and a return to school after some time away. I hope they'll be curious and hopeful and determined. I hope I'll empathize and be helpful, resourceful, and at least a little bit funny sometimes.

In the calendar year 2016, I had no First Day of School for the first time since Y2K. My first days since then have been many and varied. In shifting professional commitments to consulting, writing, and editing, I now experience jitters and meeting new people without the comforting embrace (or bookends) of the rhythm of schools. I don't get much orientation and knowing who to ask for help is not handed to me in announcements and handouts.

But some familiar things have bridged the gap. I have a lunch period, for one. (Because my office-mate-host-brother invites me to shadow his work-from-home schedule.)

So I'm gearing up for my new First Day of School and more schedules and priorities and commitments living in tension with each other. I'm filling out my color-coded calendars (don't think I'm not buying three-dimensional school supplies just because the class exists in a net of ether). I may actually buy a new (comfy) outfit. I've had lots of help from The School in figuring out who to ask for help. And I'm excited about learning and wrestling with ideas, new weekly topics, and assignment due dates with a group of humans sharing my First Day of School.

(Except the online course is almost totally asynchronous.)

Keep us posted! As an adjunct, I have wondered about a semester-less semester, and I would love to hear how this works for you. Thrilled that you are teaching. Be well!

Yay! I'm glad you're teaching again! May the student's hearts be full with your compassionate and thoughtful approach to the subject. Happy to see that you're well, Prof. Cobbey :)