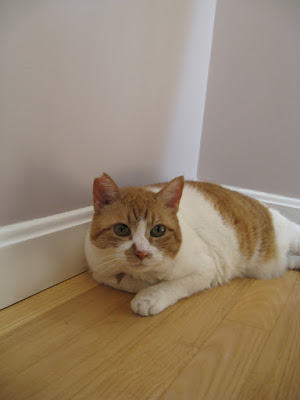 When Georgianna purrs, it's not a continuous rumble or buzz like a person making a motorboat sound flapping her lips. It's a disjointed, labored series of sounds that sound like an asthma attack, grunting, and the tiniest bit of purr.

Who knows what voicebox damage our little blob of spunk suffered during her mysterious Life on the Streets before being rescued by an animal rescue agency, put on display at the vet's, and adopted by gullible old me. Alls I know is that she can't purr like a normal cat, yet she makes such laboring effort to purr when she is as close as she gets to happy.

Unlike her puppycat, goofball brother Buddy (two months seizure free this week!), Georgie presents a consistent bad mood to the world. She's grumpy, suspicious, crabby, and, incredibly addicted to human company and attention. When Buddy purrs (which isn't nearly all the time; it is a special occasion, but - being a "special" cat - he finds his own times and reasons to do the normal cat happy thing), he's like a little motor - when I walk in the door at night, when he's playing chase, when he wants a snack, or is taking a nap. When he's not purring, he's exhibiting his usual good mood through other means: bounding, chasing, perking, attacking shadows, imaginary and otherwise...

Georgianna only purrs, and loudly, determinedly, laboredly, when she's curled up on some piece of human: my feet, hand, or belly. And when she does, I'm very often trying to sleep or concentrate on reading. Her effortful purring actually wakes me up or disturbs my concentration. It's so loud and alarming. Sounds like someone gasping for breath after being punched in the gut after running up stairs, with pneumonia. Even in her happy state, she has a look on her face: "argh! must... express... contentedness... argh!"

They say happiness is a choice. But in recent weeks, I've found it to be hard.
Posted by Rini at 9:21 AM