Turn around, bright eyes (but don't look at the map)

Every now and then we are minding our own business, getting our work done, making our stuff, when a stupid jerk starts yakking away about how we are just going to embarrass ourselves or we simply can't make what we're trying to make. The voice is coming from inside our heads!! and it is like a cat pushing our papers off the table, but with greater malicious intent and, significantly, way less self-esteem.

My friend - no really, it was a friend, not me - and mutual tweet-follower Michael tweeted a call for help this morning (hi):

How do you guys beat your inner critic? How do you shut that jerk up? What're your favorite strategies? Asking for a- me, it's for me.
— Michael Edwards (@sudomichael) April 12, 2017


How do we out-wit the voice?

So, a few trusty practices came to mind pretty quickly. Not because I don't have to sit and listen to the inner critic literally every (okay, every other) day as I write, but because I do. There are these things that do happen to work sometimes.


1. Remember a project my gut tells me was done well and re-view it. That will shut the "meh, why bother" voice up at least for a while.

2. Remember what some people (or gatekeepers) said about something I did and re-view their responses. That will give the voice someone else to argue with while I get back to work.

Then another friend of the Original Poster suggested (in addition to tried and true setting small goals and checking them off) a tactic that has had the opposite effect on me sometimes. He recommended reflecting "on the personal trail you are blazing," but I find that zooming out and looking for proof of Good Work in a big picture trajectory actually invites the mean voice to say, "So this map doesn't impress much, does it? You're no closer to the X than you were five projects ago. Wait, I can't even see the X -- what treasure are we searching for anyway?"

That can be a trip-up for the upwardly or treasurably mobile among us. The thing for me is to do The Thing that is being done now well, and to remind myself that a Thing or Two has been done well before, so don't get all mired in the map. Just this one thing now, okay.

Of course, life and creativity and productive work are none of them just a bunch of unconnected things. I am fortunate in that I have never been especially stuck on the single, ever-forward-moving path idea. But I understand its temptation and its authoritative claims for a lot of maker-workers, and Purpose driving - maybe for some, even, a 15 Year Plan - has its virtues.

There is a third Silence the Downer Inside tactic I practice even more regularly, and that is the move so fast my mind can't mess me up move. This is when I do what it takes to build some momentum - in my case, in writing - and pound out 750 or 1,000 words or more in one breath. I usually tell myself going in that "it doesn't matter if they're good or not" but that's all I'll say to myself about it because this exercise is not about self-affirmation, it's about action. Most of the time when I exhaust that burst of productivity, I look back over it without trepidation and find there is good, usable stuff right there and as a bonus, the Critic Inside got distracted and is taking a nap or something.

A caveat, for me, is necessary when it comes to pitching and self-promoting -- as in a job application, book proposal, letter of interest... They're a tricky Thing when it comes to revisiting and powering through, because the whole Thing is to deny the critic within and without. 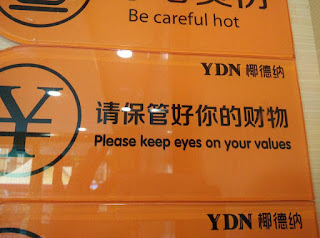 I'd like to get better at stopping and taking more time to represent Me, rather than Perfect Pitchy Me in these projects. Because sometimes I see or think up something I want to do and I'm in such a hurry to get my "Pick me!" in front of the Picker's eyes first that I bulldoze right over the good that comes from self-criticism -- the humor, the carefulness, modesty.

So, that's my take on what to do to do good stuff when I doubt the stuff is good-able.

You? Hit Michael's tweet up (if he's still looking), or share around here with us and me.